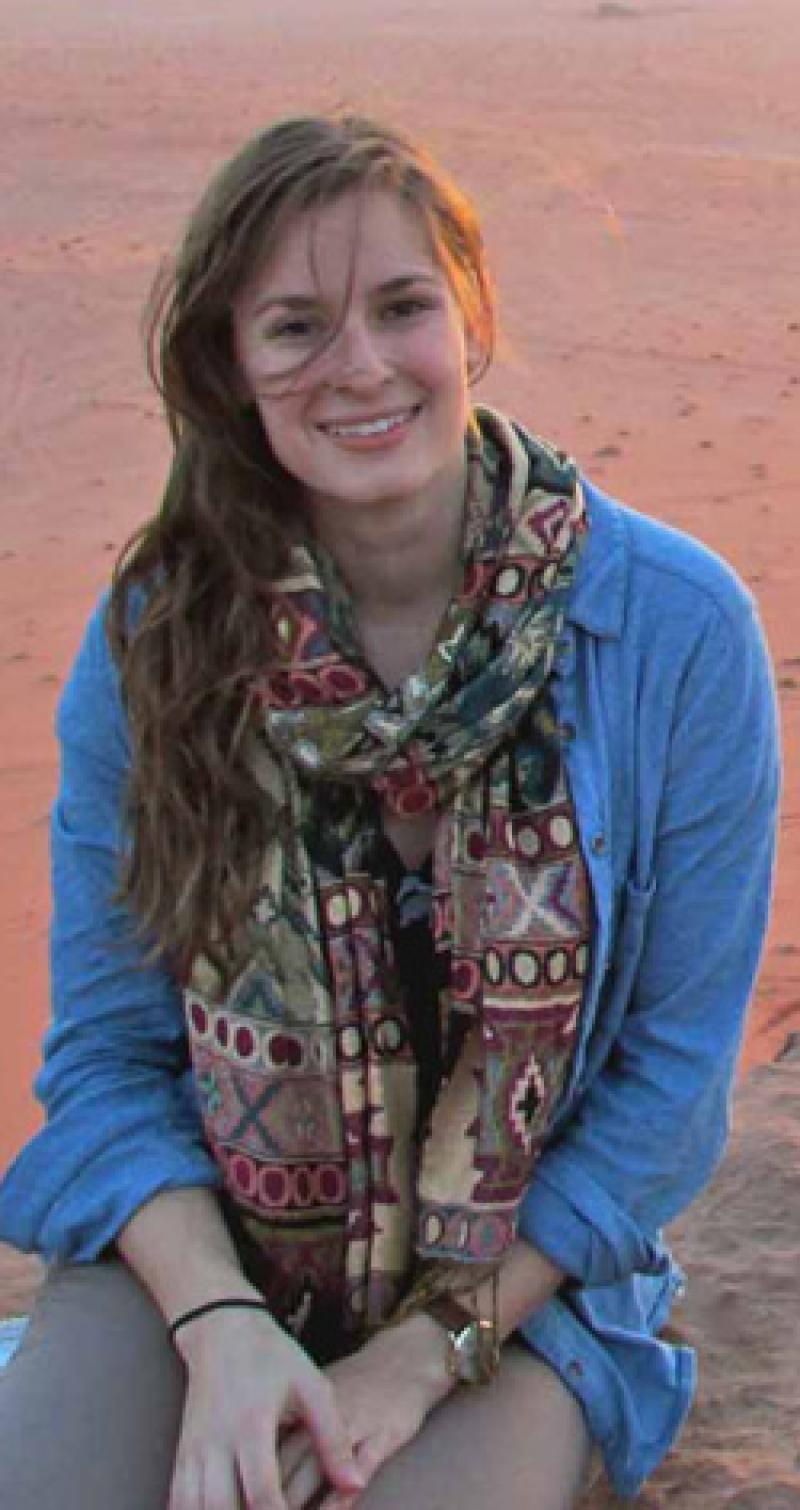 Sophie Seidner graduated summer 2013 with majors in Arabic and Middle East Studies. She spent her last semester at OSU studying Arabic in Jordan.

Sophie was chosen for a teaching Fulbright in Turkey for the 2013-14 Academic year. Here is her winning Fulbright essay.

"Language is the capacity to channel thoughts and emotions, to create bonds of mutual respect, understanding and dynamism in human relations. My previous experiences teaching English have led to my interest in doing so again in a new part of the world. In 2008, I first instructed young boys in an orphanage in Honduras teaching them English phrases and words and assisting them with their English homework. The boys loved making woven bracelets throughout the day, which I found to be a great tool to teach them words for colors and shapes in English while maintaining their attention. I also found it helpful to practice my Spanish by speaking to the boys, which usually caused them to laugh at me, but gave me the opportunity to have them correct me in English or say the same phrase in English.

The students’ willingness to work hard and their excitement at foreigner teaching them led me to become an ESL tutor in Chicago in 2010, where I taught English grammar and helped people prepare for the US citizenship test. Most of my students were adults and worked as servers in restaurants. I found it useful to simply act out a scene as a customer in their restaurant. This enabled them to become familiar with phrases but also learn how to respond quickly to various requests. Now, as an intern for the United Nations Association, I am creating and implementing an outreach program in high schools in the Columbus area to foster understanding and interaction with the Muslim community. This task involves not only coordinating with the schools and Muslim organizations but also creating lesson plans and guides. Teaching English in Turkey would give me insight into its political and societal culture and history, which I have studied formally at Ohio State. With its increasing economic growth, Turkey is a model for the European Union during financial crises, and with its delicate balance between religion and secularism, it becomes a model for institutional democracy and harmony between religion and politics for the Middle East. I want to understand its capabilities in promoting and assisting in the creation of stable democratic governments within the region and its ability to act as a mediator between the West and Muslim countries. I would also like to discover the dissonance between its Ottoman past and Turkish present.

As an ETA, I will use my previous classroom experience to help Turkish students learn English and US culture. Because I study Arabic, I know the struggles of learning a language so unlike my native tongue. I would like to teach the students several practical activities that I found useful while learning Arabic, such as typing and using a computer in English. I believe that I can use the lessons I learned from teaching in Honduras and Chicago and make them more applicable to university students. Rather than making bracelets, I believe it would be useful to discover what activities the students enjoy outside of class and help them learn how to discuss them in English. PowerPoint lessons are helpful for teaching new phrases while providing interesting visuals.

Because of my interest in the outdoors and rock climbing, I would like to teach the students about the varied geography and outdoor culture of the United States. I would like to participate in any outdoor clubs at the university, and if one does not exist, I would like to start one. Outside of the classroom, I would like to volunteer for an organization that focuses on environmental sustainability. I would like to learn about Turkey’s efforts in this area and encourage citizens to learn about environmental policies and participate in protection efforts. A year in Turkey, along with my eight months in Jordan, would prepare me for a diplomatic career in the Middle East and Muslim world. I would gain invaluable knowledge of the region and languages, which would provide me with the skills to advise foreign policy makers. The Fulbright will influence my development as an individual and an informed ambassador."