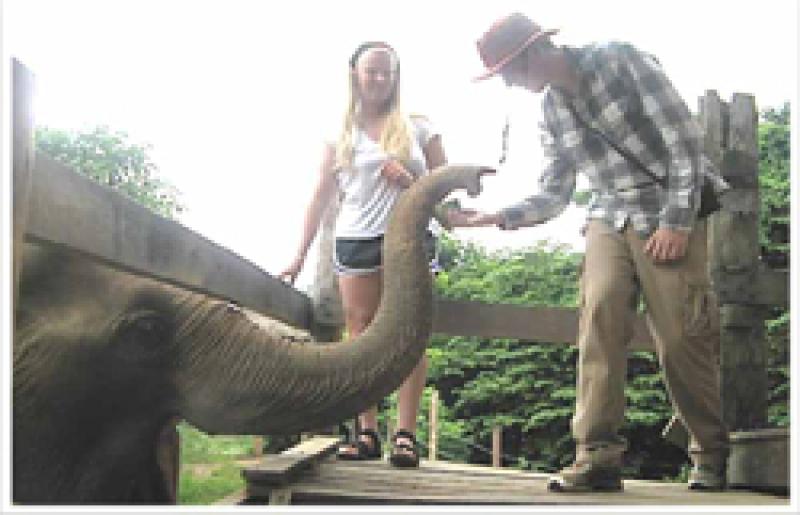 Andrew Greene is a senior majoring in Development Studies, with a minor in International Economic & Social Development. He participated in an environmental conservation internship. Here is his story.

“For four weeks this summer, I was given the life-changing opportunity to volunteer in conservation work in Thailand. I worked in establishing infrastructure for Wildlife 1 Foundation, a non‐profit organization in Thailand that works to end the illegal trade in wildlife in Southeast Asia and to provide a healthy and happy lifestyle for animals that have been rescued from the trade. Being a Development Studies major, this proved to be a fantastic opportunity for me to work in developing a conservation project and gain international experience.

I lived with the other volunteers in a small bungalow encampment within a town called Chiang Dao, a suburb of Thailand’s cultural capital and second largest city Chiang Mai. Each day, we travel by taxi (the bed of a converted pickup truck) to our project site with Wildlife 1. International Student Volunteers, the organization that made this trip possible, organized our involvement with this project, and our stay is to last two weeks before swapping with the next group of volunteers. Be cause Wildlife 1 is only in its formative stage, our tasks largely involve developing the project site to become more operational. The site of the project is in a valley and surrounded by jungle with several rice paddies near by. This site serves as the sanctuary for the rescued animals as well as the future living quarters for volunteers.

During my involvement with the project, the sanctuary housed three animals: NungDao, a Rhesus macaque; Jacques, a stump-tailed macaque; and ChoBa, an Asiatic black bear. ChoBa was bought from a trader in Myanmar (there are not yet laws against animal trade in Myanmar) where she was destined to be milked for her bile, which is used in traditional Chinese medicine. Bear paws are also considered a delicacy in parts of East Asia despite the threat to bear populations. NungDao and Jacques had both been rescued from the trade in Thailand with the help of local officials because they were being traded illegally. NungDao was luckily young when she was rescued, but Jacques had spent over three years in a small cage and had developed neurosis and habits such as chewing himself and pacing. All three of the animals are unfit to be returned to the wild, as the two monkeys are social animals that must form groups and the bear has spent its entire life in captivity. Wildlife1’s goal with these particular animals is merely to provide them with a decent life.

During the project, I took part in accomplishing a number of goals. I worked on clearing the fields that surrounded the site of brush so we would be able to build there and also to help keep wild animals away. I worked in setting up the unfinished guest house’s water system and took part in building a compost pile that the used water would drain through, thereby filtering the water as well a providing nutritious soil to some banana trees that we planted around the compost pile. I was afforded the opportunity to experience many new development tasks as well. A fellow Ohio State traveler and I worked together to build the foundation to a new primate enclosure in the field we had cleared. I also built things such as a driveway, signposts to mark the site’s entrance, and a garden where produce would be grown for the future volunteers.

The greatest part of doing work like this was that every morning I could reflect on and see how much had been accomplished since the day before. Also, it was work that was really important to me. I relished the opportunity to learn something new every day and in the process work to save animals and educate the public about them. Getting to see one’s accomplishments on a day‐to‐day basis is extremely invigorating.

Each morning would start at about 6 a.m., when the sun rose. After breakfast, the commute, and some thoughts on what needed to be done for the day, we were each assigned our day’s tasks and would begin working around 8:30. As the one of the tallest and strongest volunteers, it was expected of me each day to accomplish some of the more physical duties. Some of my work included mixing and transporting cement, measuring and sawing through pipe to fashion signposts, digging trenches for the water system and for the foundation of the new primate enclosure as well as for the garden. We would all gather in the unfinished guesthouse, at the time just a floor and roof with no walls, and serve lunch at around noon. Lunch would be a buffet of local cuisines and we would share it with the local workers, who would share folktales and Thai history with us in exchange. The work after lunch would be more laid back, as we were always ambitious in the morning when the temperature was cooler. Between 3:30 and 4:00 was the typical end of our workday.

In terms of what was expected of me specifically during the project, I believe I did diligent work and satisfied the project leaders’ expectations. I was the principal worker on building the signpost that marked the project and made it official, contributing something that was very important to the project. I was also chiefly responsible for building the foundation to the new primate enclosure. The existing enclosure was a couple hundred meters from the guest house, and this new one would be next to it and away from the jungle where the primates were occasionally harassed by wild dogs. Building the new enclosure required measuring out the perimeter, digging a level trench to lay cinder blocks in as markers, and laying cement over the area once the cinder blocks were level and the perimeter was marked. This is something that was very satisfying to reflect on each day, as I could observe the progress being made and the finished foundation. 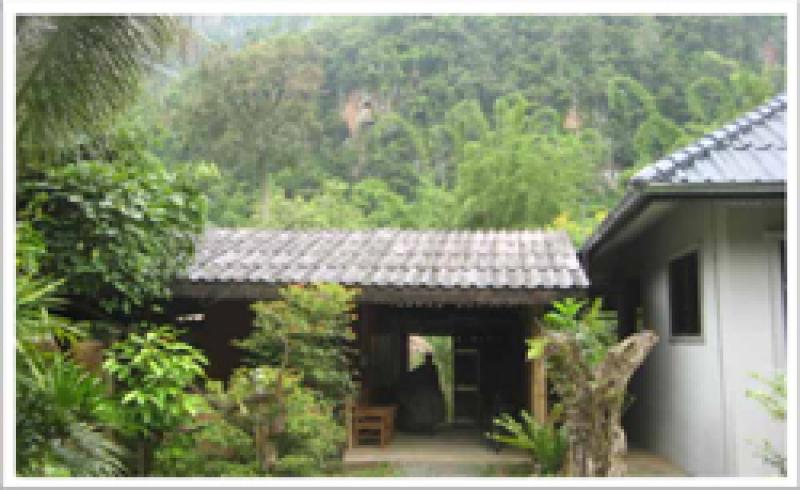 One day we took a field trip after lunch to a nearby hill tribe village. There are many different hill tribes in Thailand, each with their own language, culture, and customs. On this day, we trekked through the village to a school where we would be interacting with young children from the village and teaching them some English. I’ve never viewed myself as much of a teacher or as being very good with kids, but I must say that this was one of the most rewarding opportunities of the trip. Though the children’s native language was not Thai, they had learned Thai in school and had some familiarity with English as well. We taught them a few basics in the short time we were there, but it was rewarding because we could see that these children in this remote mountain village on the opposite side of the world were very much like children back home. They would tease each other, encourage each other, try their best at the unfamiliar exercises we assigned to them, and were above all excited to meet strange teachers from a far off land. Going to that school made me wonder how I might have felt if I were visited by a foreign teacher at that age in my small town. I am very thankful that I was able to share that time with the children and with my fellow volunteers.

My internship experience has revitalized my scholarly aspirations. As a Development Studies major, I hope conservation and development projects will always be a part of my career. Before I did this study abroad trip, I was feeling very unsure about my future. I was certainly interested in international studies but I was not sure if living abroad and becoming a part of foreign cultures and speaking foreign languages was what I would want to do with my life. Living and working in Thailand, seeing the progress of my work each day, the steps the organization was able to take with regards to influencing local wildlife policy, and speaking Thai and eating Thai food were huge positive reinforcements in my career choice. Because of this trip, I am much more sure of my abilities to positively contribute to the world in the field of development.

Volunteering with Wildlife 1 has shown me what working in international development is like and has reassured me that it is what I want to do. I will be graduating with a B.A. in Development Studies next year, and this trip has given me interest in pursuing a graduate degree and perhaps another trip to study abroad. The experience allowed me to use my knowledge and determination to give to Thailand, but Thailand gave me the confidence to go forward and continue to achieve in higher education. This internship was definitely a milestone in my pursuit to better myself and my field of study.”