"Upon arriving at the Udon Thani airport in Northeastern Thailand, the usual wave of adventure and unexplainable happiness which comes with stepping into the unknown swept over my entire being. I thought to myself: 'Finally, I am here'. The faint, yet firm idea that I should go, had to go, to Thailand had been steadily growing in my consciousness since before last May. Beginning in January, I would live and work as a volunteer teacher at Nadeepitiayakohm School, located in a small village, just about an hour from Nong Khai. At the government sponsored school, about 435 Matthayom students (ages 12‐17) come to fulfill their secondary education requirements each day. The parade of uniformed students and teachers alike, arriving most often by motorbike, is in and of itself an experience. 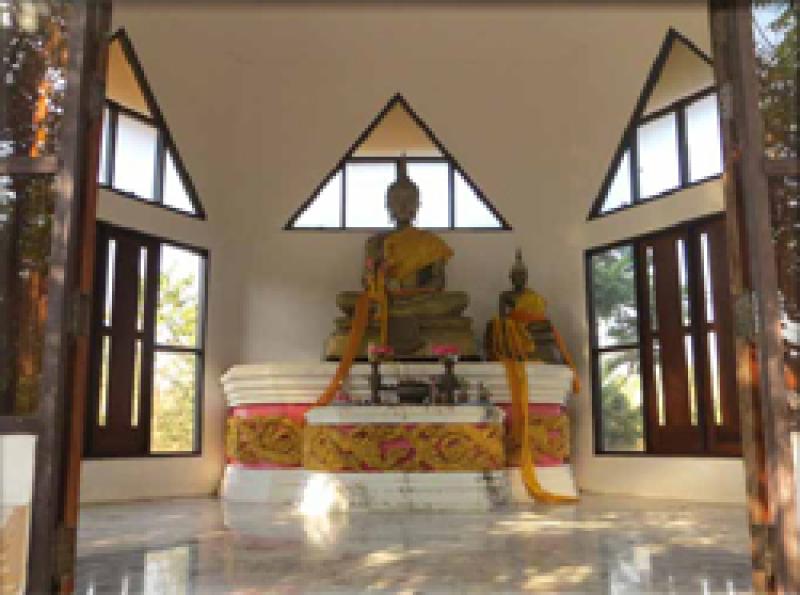 Within the student body, there are 20 at the school who are sponsored by the Swiss organization, Foundation HopeHouse. The organization funds highly motivated, yet financially burdened students as well as volunteers who aim to add to the students' learning. In the past, this has taken the form of first aid training, vocational training, and even teaching computer and professional skills . Essentially, my specific role with the Foundation was to facilitate three to four English classes a day, help with language club once a week, and lead a group of intermediate students in a supplemental class after school. In short, my job was to convince students that speaking English was, in fact, not so scary!

It's fair to say, as much as I'd rather not admit it, that the first two weeks after my arrival didn't for the most part focus on the lesson plans I was to teach. Instead, I divided my time equally between wondering if the students understood anything I said, and trying to create an atmosphere the students were comfortable in. The latter was basically achieved by making myself look foolish in front of class, and though it took some determination, as well as athletic ability (running down aisles in 90ºF isn't that easy) I'd like to think I was successful. The first was a bit more difficult to overcome, and despite my grandmother's constant pleads, I think I finally understand the meaning of 'speak slowly'.

Here in Northeastern Thailand, more commonly known as Isan, the cost of schooling for one student per year is 6,000 baht (30 ฿ 1USD). Transportation costs are on average 2,400฿ , and the compulsory uniforms total 750฿. Add to that the fact that Thailand's north east is among the poorest regions in the country, and the monetary barriers become clear. For sake of perspective, the average household income per student family is 4,000฿ each month**. Because of Isan's dependence on crops and agriculture, income can vary greatly based on the success of the year's harvest. It's logical then, that this combination of factors i.e. tuition, associated costs, and the predicted monetary return in obtaining an education, are not always seen as favorable to parents or caretakers.

However, difficulties in Thai education are more complicated than a simple lack of funding. In the North East for example, the Isan language, not Thai, is most often spoken at home. While the students surely have great knowledge of Thai, this language difference still serves as an obstacle for some students.

In addition, English competency is required of all students before graduation from secondary school. In more isolated regions such as Isan, where few if any native speakers work, this requirement proves especially difficult. In 2015, ASEAN (Association of South East Asian Nations) aims to transform its member nations, of which Thailand belongs, into a single labor market. “The economic integration goals will include the elimination of tariffs, free professional movement, capital and a faster customs clearance procedure" (Asean Community 2015). With this free flow, knowledge of the English language, among others such as Chinese, Japanese, etc., will become a vital component in determining a student's success in school and beyond.

Whatever reasons may have led me here, I am confident in saying that they have been shifted, changed, and altered. Certainly any previous notions I may have held in what shapes a successful education have changed. During this short period as a volunteer teacher, I have learned that educational hindrances can stem from an intricate web of shortcomings and it takes a comprehensive view to tackle these problems. Without a holistic approach such as this, educational reform, no matter the location, isn't possible. I've learned that despite the vision I have of myself as Andrew Zimmern, I shouldn't eat all bizarre foods that are presented to me (Listen to OIA when they tell you to be careful with what you eat!). And perhaps most importantly, I've learned to be flexible; That its better to act as a changeable mold than with a stern rigidity. “