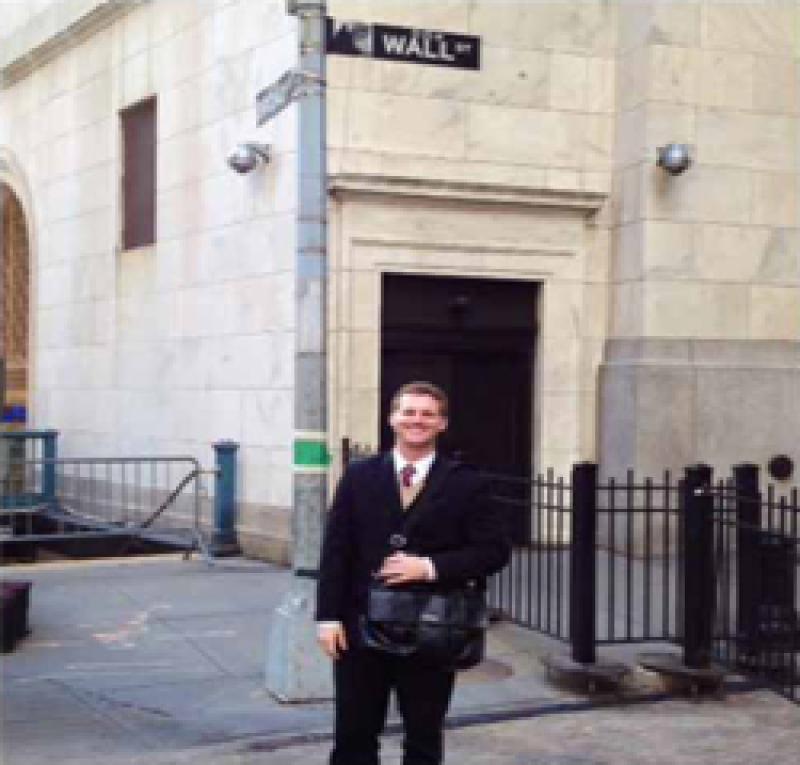 Liam Birt is a Spring 2011 graduate of The Ohio State University, where he majored in World Economy & Business. During his undergraduate career he had the privilege of interning for Mission Medical Corporation, where he specialized in developing country market research for pre‐owned and refurbished medical equipment. His market research included such countries as Venezuela, Colombia, Belize and Vietnam. Here is his update since graduation.

"I moved to New York City upon graduating from Ohio State in 2011. I lived in a place where there were five rooms and up to ten roommates at any given time. Evidently, this is a pretty standard living situation when you first move to New York City. Panjiva was the first company at which I worked. It's the most efficient and accurate global sourcing database in the world. It's located in the Flatiron District, with the historic Flatiron Building less than 100 yards away from the front door of the building. It was a great place to start my career.

Panjiva helps buyers in the United States connect virtually with every supplier in the world that exports to the United States via cargo vessel. Panjiva eliminates a significant amount of research and travel time when trying to find overseas manufacturers of whatever commodity you are interested in sourcing. My role was to cold call on companies that were importing goods, and offer them the opportunity to have access to that database. I would also attend global sourcing trade shows where I was able to meet people from literally all over the world. I worked there for one full year before I decided to take another position at an incredible company called IBISWorld.

IBISWorld is the largest publisher of industry intelligence in the world. The company is in the Trump Building on Wall Street. I was presented with the opportunity to interview at IBISWorld by one of my colleagues who I previously worked with at Panjiva, Bobby Routh. IBISWorld is an Australian based company with a great mix of people from Australia, UK, South Africa and various parts of the U.S. As a Business Development Manager, I work with companies that have a need for qualitative economic analysis on specific industries to do a number of things, including mitigating the risk of lending, putting together marketing material, and achieving lower rates on corporate annual contracts, to name a few.

It's an incredible position, and in a recovering & growing economy, there is no other company that I'd rather work for. On a more personal level, I've moved four times in the 17 months that I've lived in New York City. I've moved to some very interesting areas in Brooklyn, and have finally settled (or at least I hope so) in the Financial District with less than a ten minute walk to work. I'll conclude my story by saying that if you're thinking of moving to this city, and you hear people say that it takes about a year and often times more to finally get settled, they aren't joking. It's an incredible experience which makes the hectic lifestyle totally worth it. There's no other city in the world that I could see myself living in at this point in time."