The ancient walls, glittering domes and graceful spires are iconic symbols of the Old City of Jerusalem. Eleven Ohio State University students had the opportunity to visit Jerusalem this May for two weeks as part of the Living Jerusalem Project study abroad tour. The group, led by Dr. Amy Horowitz and Noura Dabdoub, toured the wellknown sites: the Western Wall, the Church of the Holy Sepulcher, and the Dome of the Rock and Al Aqsa mosques.

The students, however, were exposed to perspectives of Jerusalem rarely experienced by tourists. Before embarking on the trip, students of the International Studies Living Jerusalem course studied Jerusalem's religions, multiple histories, complex political issues, and intersecting cultural practices. Chandni Pawar, a senior in Chemistry, noted that "Despite our classroom preparation, this lifechanging trip surpassed all of my expectations…we met with activists, religious leaders, and families all with unique opinions and perspectives on life in this multifaceted city." Hannah Trate, a sophomore in Political Science and Middle Eastern Studies, echoed this sentiment, stating “a few weeks before arriving in Jerusalem, I remember casually remarking in a moment of arrogant ignorance that I suspected 'little would surprise me in Jerusalem'... As it turned out, no amount of secondhand knowledge could have fully prepared me for the coming two weeks.” Tour participants were hosted and guided by Israeli, Palestinian, Muslim, Jewish and Christian scholars, artists, politicians, diplomats and religious practitioners on a program designed to present multiple—and at times conflicting—perspectives that keep Jerusalem at the center of imagination and inquiry. The Living Jerusalem tour group spent the first week in West Jerusalem, the predominately Jewish Israeli section of the city, and the second week in the predominately Muslim and Christian Palestinian East Jerusalem. Trate described experiencing the multiple divisions of Jerusalem, saying "We had opportunities to meet incredible people, analyze conflicting narratives, and try to understand the impact that living within such tangible conflict has had on people's daily lives. At the same time, we were forced to recognize that life in Jerusalem is so much more than conflict. It's family and friends and food and shopping. You could have a protest on one side of a street, while the other side is filled with merchants, restaurants, and people going about their daily lives. And this, in Jerusalem, is normalcy." 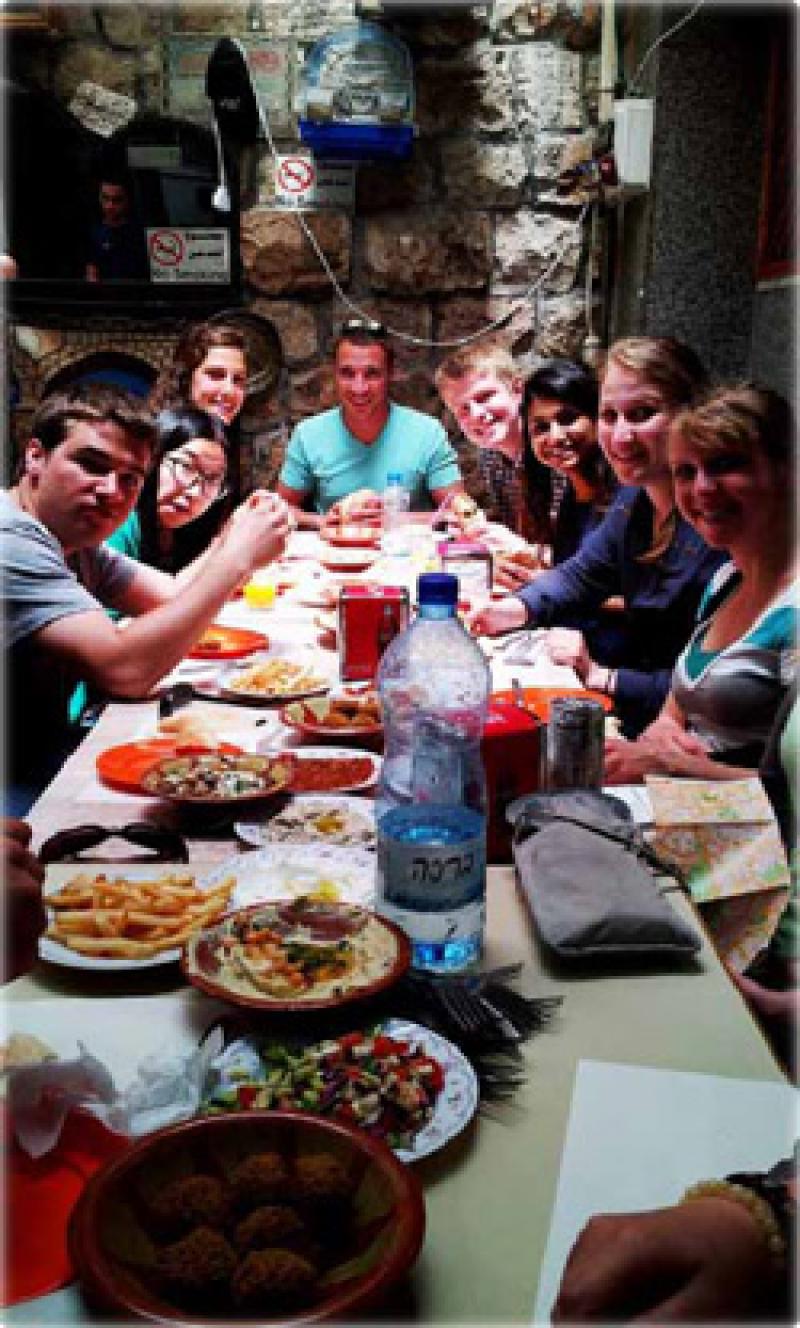 The group met with several community activist groups, including the Jerusalem Open House, one of the only Israeli LGBTQ rights organization located in Jerusalem. Students listened to deeply personal stories about how members of the organization came out to their families and how they address the difficulties of living in Jerusalem. The group also visited Beit Safafa, a neighborhood of Jerusalem located directly in the path of a planned Israeli highway that would divide the area in two, and met with local youth who organized legal opposition to the highway. Experiencing music was a highlight of the tour. The group visited the studio of Sabreen, a Palestinian band and non‐profit organization that provides music education. Students were treated to a live jam session with Said Murad, singer and producer, using traditional instruments such as the Oud (lute), Shibabah (reed flute), and Tablah (skin drum). The group toured the Hand‐in‐Hand school, where kindergarten through high school students are taught using a model of bilingualism (Arabic and Hebrew), multiculturalism, and equality. The OSU students witnessed a music class where children sang songs in Arabic—but read the lyrics of songs in both Arabic and Hebrew.

Food and family were also memorable features of the trip. The group experienced a traditional Shabbat dinner with a Jewish family living in the Nachlaot neighborhood of Jerusalem—complete with fresh‐baked Challah bread and beautifully chanted prayers. Later in the trip, students were invited to lunch at the homes of Palestinian families in Beit Sahour, close to Bethlehem, and tasted traditional foods such as Maftool and Hummous.

After the scheduled daily events, students were free to explore Jerusalem on their own. They navigated the crowded and hectic marketplace of the Old City, bartered with vendors, sampled local food, and met new people. In the evening, students spent time with local college students and engaged in thought‐provoking discussions about the city. Dr. Amy Horowitz, Living Jerusalem Resident Director, summarized the experience of the trip, saying, "What I loved the most about this Living Jerusalem study tour was how much I learned from the students as they discovered the city. To say this was a sharp group of critical thinkers would be an understatement—they relentlessly probed beneath surfaces, challenged conflicting narratives, and confronted their own preconceived notions."