Patrick Njeru is a junior majoring in Security & Intelligence with minors in Military Science and Swahili. He is a member of the Army ROTC. During the summer he had the opportunity to work with allied soldiers in Vicenza, Italy.

The African Command is in charge of U.S military affairs on the whole continent of Africa with the exception of Egypt. Each combatant command has all four branches of the military assigned to it. Although the command’s headquarters are in Germany, United States Army Africa (USARAF), the army component of the African Command is based in Vicenza, Italy. This is the branch of the African Command that is comprised of the army only. There are different brigades under this, ranging from intelligence to infantry brigades. Being an aspiring military intelligence officer, I got the chance to work side by side with the staff of the military intelligence department. The internship program was inclusive of many activities that soldiers attached to the command do on a regular basis. 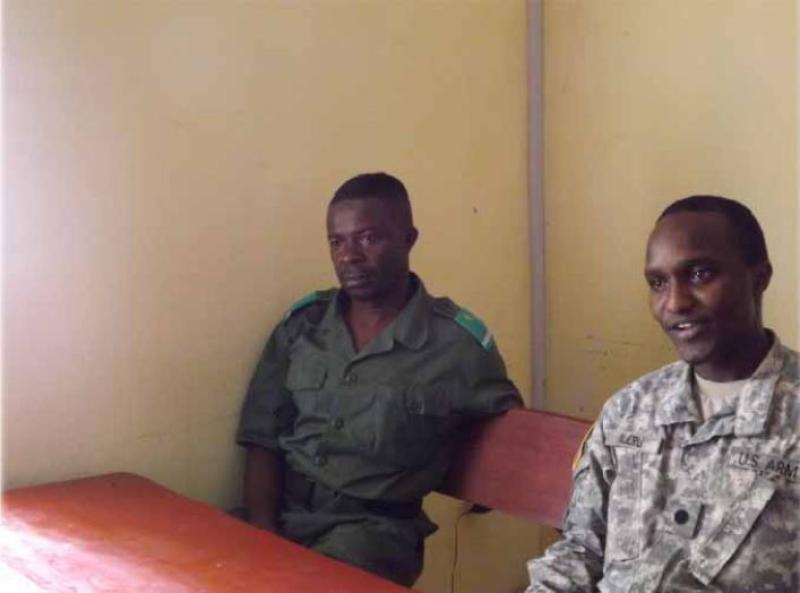 As an army cadet enrolled and contracted with the United States Army Reserve Officer Training Corps (ROTC), one has many opportunities throughout their college career to engage in different activities and training programs that prepare him or her for their future careers, particularly military based careers. The four year program is designed to build students into capable future leaders. One such opportunity is the Cultural Understanding and Language Proficiency (CULP) program. This summer, after my sophomore year, I applied and was selected to take part in a two month long internship with the United States Army Command Africa Division.

As a future army officer any leadership role you receive prior to your commissioning is an added advantage because as a commissioned officer one of your major duties is to lead soldiers, both in times of peace and in combat. Prior to the deployment I was selected as my team’s executive officer (XO) by the mission commander. I was tasked with keeping in touch with the rest of the team and making sure that they had all the necessary documents and other mission essential items by the set deadlines. This involved frequent communications with my fellow team members and keeping my mission commander briefed of all mission related activities involving my team.

The internship was divided into two parts; a three week long military to military interaction with the Comoros Defense Force. This consisted mainly of teaching them our general battle tactics, techniques, and procedures. We had to do all the classes in English so as to improve their comfort and command of the English language. Before we left for Comoros we were briefed on what was expected of us while on the deployment and what the desired outcome was. Comoros, being a friendly nation and a member of the African Union, is expected to contribute troops to missions that are run under the African Union banner. This sometimes leads to them working side by side with American soldiers. During the duration of the classes we trained and interacted with them mainly using English. The experience in Comoros was exciting albeit challenging. The language barrier was one of the biggest obstacles we faced, while most of my team spoke English as the primary language, we found out that the prominent language on the island was French and a dialect of Swahili known as Shikomoro.

After the three weeks in Comoros, the team headed to Italy. We did a one week tour of different Italian military installations; we went to the Italian cadet training facilities, where we mingled with our Italian cadet counterparts. At these meetings we were expected to create and establish lasting relationships with them because in the future as we go up the ranks side by side with them, we will one day work together to carry out the policies of both our countries. This was followed by a month long staff duty assignment tied to a specific staff officer in Vicenza, Italy. Each team member was assigned to an officer who was in the branch into which the cadet wants to commission.

At first, I was attached to Second Lieutenant Shawn Robertson who was the intelligence officer for the 1st Battalion 173rd airborne infantry division. His major task is to collect, analyze, and compile daily intelligence related data from the specific region he is assigned to and brief the commander so that the commander can make an informed decision based on the briefs he receives. Although this is his primary job description, I soon realized that in a unit no matter what your job specification is, if a need arises and you are needed to do something else, you will be tasked out for it. During my time with him, he had been tasked to carry out the battalion’s sensitive items check (SI). This is when a complete inventory is conducted on a unit’s weapons and combat related equipment. I assisted him in doing this while at the same time we had to go through intelligence reports to brief the commander about when he asked for them. On some days we worked for very long hours and the lieutenant was honest with me and told me that he was happy I got to shadow him when he was tasked with a lot of work so that I could see what my future career was really like. I enjoyed every single minute of my time with him; I considered it my indoctrination into the intelligence world.

My next assignment was to work with the General 2 section (G2), this office does the same job as an S2 but at a higher level. They prepare intelligence briefs for the Commanding General in charge of USARAF. At this office I was assigned to Major Sink, an army officer with over nineteen years of experience. Just like before, he delegated assignments that were current and relevant to the division’s operational needs. I got to research, prepare, and brief his superiors and peers alike on matters relating to the countries in Africa that I had been assigned. This was a challenging assignment for me, but after a walkthrough on all the resources and intelligence sources at my disposal to work with I managed to get through it. What I found strange was that at every brief, even after briefing all the facts according to what sources on the ground had collected, the commander always asked, 'What is your personal opinion on the issue? What do you think that person or that group intends to do? What is your prediction a few months down the line of what the conditions and situations will be in those countries?'

I knew from the beginning that my major, International Studies specializing in Security and Intelligence was an important field to study, especially in my line of work. But I did not realize how much my classes had actually expanded my knowledge of the domain into which I was preparing to enter. Most of the questions I had to answer about my personal opinion were strongly guided by what I had learned in my classes coupled with the information I had received from the various sources. At the end of the trip, we had the opportunity to meet with Major General Darryl A. Williams, the Commanding General for USARAF. His questions varied from our experiences with the division to recommendations we had about such future operations. He asked us to compile the changes and suggestions we think will be helpful to the division and to the Army in general. Our team was extremely honored when he told us that he was flying to Washington D.C to meet with General Ray Odierno, the Army Chief of Staff , and that he would personally relay our proposals to him. This was a major milestone for us, since we are so new to the army. We had been given the opportunity to make suggestion that might influence the Army’s decisions in the future.

Professionally, this opportunity has had an immense impact on me. I have had first‐hand experience in my chosen field. I met and worked with some of the best cadets from around the country. We established a good working relationship which in the future we all will exploit in order to enhance both our careers and the military’s objectives. We also got to meet and know senior army officers in the various fields we worked under. This will also be beneficial in the future.

As I write this paper I am humbled by the fact that some of the issues I covered while working at the division’s G2 office are happening around the continent of Africa. As I continue with my education and keeping up with current affairs on issues affecting my desired region of operations upon commissioning, I cannot understate the importance of my college career path and the impact it has on giving me an insight into what leads to some of these situations and what the best course of action is to tackle them."