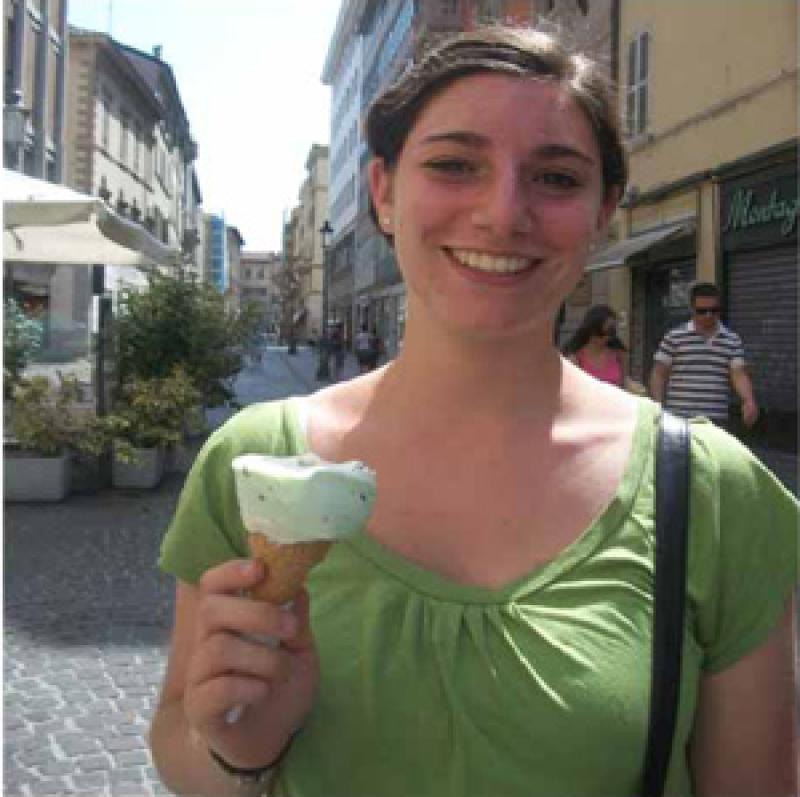 Stephanie Weisfeld is a junior majoring in French, Development Studies and also completing a minor in Spanish. She was chosen by the U.S. Department of State for an internship in Rome, Italy. Here are her reflections on her internship!

"As Ohio State students, we are exposed to so many different opportunities that it is often difficult to sort through them all to find the ones that actually apply to our interests. One thing I have learned, however, is that it is well worth the time to skim the lists of career fairs and info sessions available at the university. If you do, you just might end up stumbling upon an incredible, once‐in‐a‐lifetime experience: like interning at the U.S. Consulate General in Milan, Italy!

Last fall I received an e‐mail notifying me that a regional diplomat‐inresidence from the U.S. Department of State was coming to campus to speak about internship opportunities. I decided I would attend, after all I had nothing to lose and much to gain (as is the case for all information sessions). After the presentation, I was very impressed but had a few reservations. In most cases, State Department interns do not receive housing or any kind of stipend to cover the cost of travel, food, or living. All the same, I decided it was worth it to at least introduce myself to Jim Ellickson‐Brown (the Diplomat‐in‐Residence). He gave me his card, and I e‐mailed him soon after with my questions.

We continued to keep in touch throughout the application process. Jim helped me every step of the way, even adding me to a special list of applicants. In the end, I was thrilled to receive two offers (one from each of the consulates in Italy) and one interview (for the embassy in Latvia). After much thought, I decided to spend my summer at the U.S. Consulate in Milan with one of the few paid internships that the State Department offers each summer.

While my time in Milan has not yet come to an end, I can safely say that this experience has been invaluable to me for more reasons than I could have imagined. Not only have I gained insight into the inner‐workings of the State Department and the careers of foreign service officers, I have also learned how to behave in a work environment and survive and thrive in a country where everything (including the language) is completely foreign to me. I learned a great deal even before stepping foot in the consulate. I used my newfound networking skills to find a wonderful apartment as well as some valuable insight into what I could expect from life in Milan.

There are two experiences which I believe helped prepare me the most for this internship. The first is my participation in the English Conversation Partners Program at Ohio State. As a part of this program, each quarter I am paired with an international student looking to practice their English. This helps enhance my cross‐cultural communication skills and also gives me practice in working through language barriers (a skill which has been very useful to me here!). Plus, in today's global environment, it never hurts to have contacts from all around the world, as evidenced by my experience this summer.

One of my past conversation partners put me in contact with a friend of hers who currently lives in Milan. Her friend was an integral part of shaping my experience in Milan, picking me up at the airport, helping me buy a cell phone and metro pass, and even inviting me along for social outings with friends. Without this contact, I may have had difficulty adjusting to Milan. I am so thankful that through this program, not only am I learning about different cultures and helping people improve their English, I am also making close friends from all corners of the world!

The second important experience which prepared me for my work at the consulate is the time I spent volunteering at the International Services Center (ISC) in Cleveland, OH. At ISC, I tutored refugees in English as a second language. Many of these refugees came from horrible conditions in Burma and Nepal. I was amazed to see how much hope and optimism they retained despite all of their struggles. My relationships with these remarkable people made me eager to improve the lives of others like them all around the world, and reinforced my interest in learning and teaching languages. It also gave me even more confidence in my ability to overcome language barriers and interact with a very wide range of people.

Simply by being present in the consulate day‐to‐day, I have learned a great deal about the way the State Department functions as part of the United States government. One thing that surprised me the most when I first arrived is that the majority of workers at the consulate were Italian rather than American. All of my coworkers are incredibly friendly, and I was pleasantly surprised at how laid back the work environment was compared to the strict and stuffy atmosphere I was expecting.

Of course I have learned a lot about Milan and Italy as well. Since Milan is considered the fashion capital of the world, I had envisioned being surrounded by a bunch of snooty, welldressed models who did not speak a word of English and despised Americans. I could not have been more wrong. Despite the number of fashionable people in Milan (which is admittedly a bit higher than that of Columbus) most people are not much different from those is the U.S. Sightings of sweatpants and tennis shoes are rare occurrences, but I do not feel out of place here based on the clothes I wear. In addition, I have been overwhelmed with the kindness with which I have been received. I cannot count how many times I got lost and asked for directions, and each time I did, the Milanese were happy to help me out!

One particular time I relied on the navigational skills of friendly Italians was the day before the huge Independence Day party hosted by the consulate. One of my fellow interns and I were tasked with purchasing paper to use for the party program we had created. Had I been issued this project in the U.S., I would have simply driven over to Office Max, Staples, Target or any number of other stores which have a large selection of paper products to choose from. In Italy, however, most stores are very specialized, focusing on one small category of products. So my colleague and I wandered around Milan for over 4 hours before we were able to find what we needed. In the end, even though it was a tiring and frustrating experience, I was proud of my resourcefulness! I now feel confident about my ability to travel on my own in a foreign country.

In addition to the wild goose chase for paper, I have had lots of very interesting work at the consulate! My favorite experience was working in the consular section. I mostly helped out in the NIV (non‐immigration visa) side of the section. There, I was able to learn about the steps necessary to apply for a visa to travel or work in the United States. I observed visa candidate interviews, took fingerprints and even printed some visas on my own! On the other side of the section, ACS (American Citizen Services), I printed replacements for lost or stolen U.S. passports, and observed the procedures for passport renewals, death of U.S. citizens abroad, and reports of birth abroad (notifying the U.S. government when a child of an American citizen is born abroad). I also hugely enjoyed the time I spent in the management section, where I was based for the summer. There I was a part of planning for the Independence Day celebration, compiling and organizing all of the documents and information used to prepare for the party. I was also able to work with the CLO (Community Liaison Office) to see what kinds of programs the State Department provides for the families of FSOs (foreign service officers). I was pleased to find that the consulate workers and their families together form a welcoming community, and the CLO helps to nurture the relationships within that community.

I have had a very fulfilling experience working here at the U.S. Consulate in Milan. I have learned that I am more adventurous than I give myself credit for, and, I should not let any little doubts hold me back from having more adventures! In the future, I plan to learn more languages, travel as much as possible, and look into teaching English abroad through programs such as Fulbright or Peace Corps."