From London to Amman, Jordan

Stephanie Sobek is a senior majoring in Middle East Studies and Political Science. She is also completing a minor in Arabic.

"I sat patiently on a red, woolen cushion as the small porcelain cup of coffee was passed around the circle of American students. We were gathered in a Bedouin tent in Jordan. Once all had been served, Sheikh Abu Jibraayil of the Al-Amareen tribe began to explain tribal law and conflict resolution. I was intrigued when the Sheikh used the Arabic words ard ("land") and sharaf ("honor") interchangeably; the Bedouins, he explained, associate land with honor, a commonality still reflected in the modern Arabic language. Such subtle, yet significant cultural differences have inspired my study of the Middle East and the Arabic language, and have motivated me to pursue a career with the Foreign Service in the Middle East. In preparation for this career, I participated in a six week, "Peace and Conflict Resolution in the Middle East" study abroad program in London and Amman this summer. 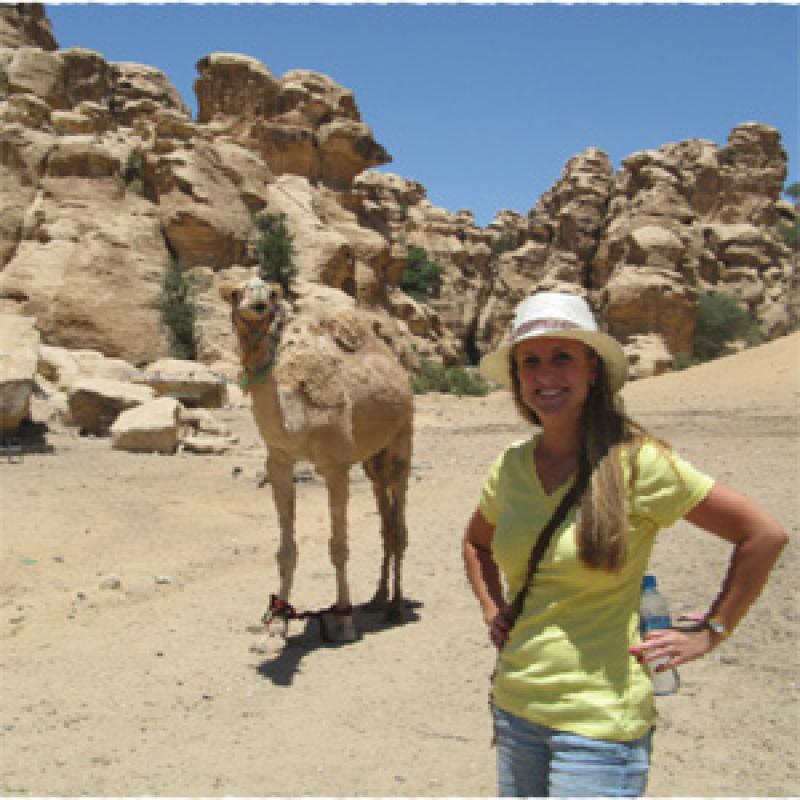 I spent the first three weeks of the program in London studying the conflict in Northern Ireland. Under the direction of Dr. Paul Arthur from the University of Ulster, my classes focused on the Northern Ireland peace process and how it might be transferred to current conflicts in the Middle East. I had the opportunity to meet with Jonathan Powell, Tony Blair's Chief of Staff and Lord Alerdice to discuss their contributions to the peace negotiations. My personal research dealt with the incorporation of terrorist groups such as the IRA into the peace process in Northern Ireland and what implications this approach may hold for the current union between Fatah and Hamas in the Palestinian-Israeli conflict.

From London, we moved to Amman, Jordan where we analyzed various Middle Eastern conflicts and possible solutions for peace. Through this program, I also met with prominent figures in Jordanian society such as Dr. Abd al- Salaam al-Majali and Dr. Kamel Abu Jaber, who lectured on political issues facing the Middle East and their potential solutions. I also had the opportunity to immerse myself in Jordanian culture by camping out with Bedouins in Wadi Rum, visiting Petra and spending the day with the sheikhs of the Al-Amareen tribe. Overall, it was an amazing experience both culturally and academically. I hope to return to Jordan next year as a Fulbright Scholar to teach English, Insha'Allah!"