"My fall semester was spent in Arusha, Tanzania as a participant in a service learning study abroad program hosted by University of Albany in partnership with Global Service Corp - TZ, a US based NGO focusing on food security.

The integrated program concentrated on sustainable agriculture methods, HIV/AIDS education and food drying. After completing a three week intensive course in these topics, I joined the Global Service Corp team, and trained community groups in these topics alongside the Tanzanian staff. The majority of the work I completed took place in rural communities and required us to camp out, but while studying in Arusha, I stayed with a host family.

My experiences living with a host family and camping with the GSC staff were undoubtedly highlights of my program. It was refreshing to live without all the clutter and distractions associated with a Western lifestyle and I found myself with more time to engage with people instead of objects. 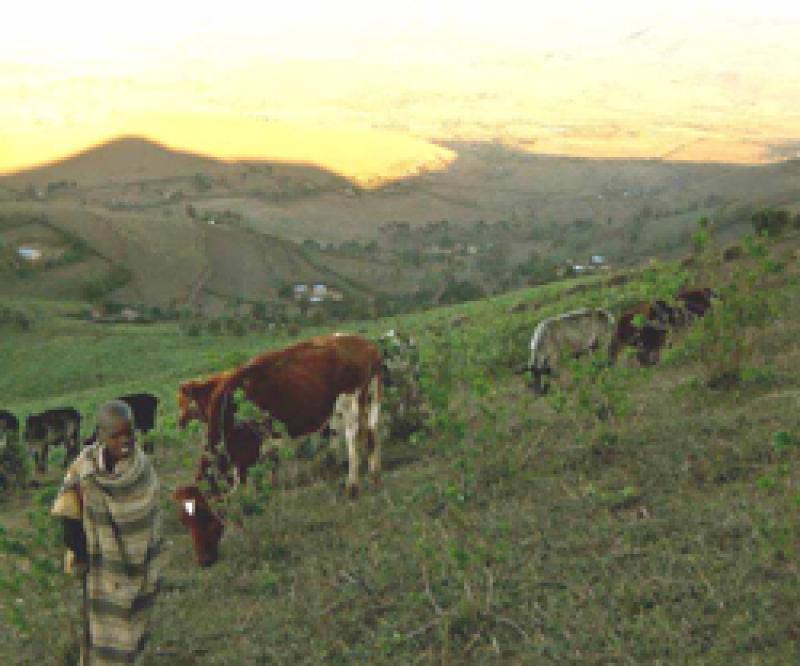 Although the faces, tastes, smells, and sunshine seem far away, I still hold them close to my heart on cold Columbus mornings. Tanzanian culture taught me to live in the moment and value the time spent relaxing as time not wasted. I felt for the first time in my adult life that I was truly living for the sake of that given moment, and not constantly planning for the future or the next item on my agenda. Although I am struggling to apply these concepts to my fast paced life at OSU, I value this new perspective.

The inevitable question arises in conversation with familiar faces, "How was Tanzania?" I most often respond with a generic "amazing, great, awesome" as I haven't come up with an accurate response. It has forced me to reflect and ask myself, so really, how was Tanzania? It was challenging yet relaxing, discouraging at times but equally encouraging and I realized the privilege I possessed just because of where I came from, but felt powerless for this same reason.

I experienced the paradoxical emotions of powerfulness and powerlessness while conducting chicken vaccinations in the village of Samaria. In Tanzania, New Castle Disease kills an estimated 70% of chickens while the vaccination is a simple eye drop that costs less than one cent and gives immunity for four months. We were conducting an awareness and vaccination campaign by walking house to house at sunrise to vaccinate chickens. This provided me with a candid insight into the living conditions of many rural Tanzanians and I was blown away by their resourcefulness and graciousness but also by the frequent existence of extreme poverty. Because of the difficulties in spreading information among the rural population, some households were unaware of the vaccination campaign and subsequently let their chickens out of the coup before we arrived. The chickens roam free so it made it impossible to catch and vaccinate the chickens if they were let out. So there I was, standing in front of visibly malnourished children, holding a vaccination that could significantly increase their intake of food for four months, and I was unable to utilize it. We had to move on to the next house. I wanted to chase every chicken down, to feel like I somehow helped these families, but it just wasn’t possible due to resources and time.

I learned that no matter how hard myself or anyone wants to remedy injustices and satisfy the basic needs of a struggling population, no single hand is big enough. At times I felt discouraged, that the issues facing development were overwhelming, and Global Service Corp and other similar NGOs were just chipping into the top of the iceberg standing between what these people have and what they, as human beings, deserve.

At a point I considered: Wouldn’t it be easier to throw my hands up, go home, switch my major, and not consider this as my problem? If it were even possible, I would never wish that for myself. I have discovered my passion, purpose and responsibility. I witnessed the effect that one person or organization can have on a single life, a family or community. The value of this relatively small positive change should not be overshadowed by the sometimes slow improvements and setbacks in the bigger picture of development.

I am determined to continue pursuing International Development at the graduate level, in addition to continuing my work at the Center for African Studies at OSU. I came home with just as many questions as I did answers and I value now, more than ever, the resources available to me at Ohio State University."